“Marvellous things happen to one in Greece–marvellous good things which can happen to one nowhere else on earth. Somehow, almost as if He were nodding, Greece still remains under the protection of the Creator. Men may go about their puny, ineffectual bedevilment, even in Greece, but God’s magic is still at work and, no matter what the race of man may do or try to do, Greece is still a sacred precinct–and my belief is it will remain so until the end of time.”

~ Henry Miller, The Colossus of Maroussi

Mykonos,
Kusadasi (Ephesus, House of Virgin Mary)
Patmos (the island of the apocalyptic revelations of St. John the Divine)
Crete (Heraclion and Knossos)
Santorini (the island which might have been the lost Atlantis)

Greece is a mystical place of the human spirit. In this land, the ancient and the modern, the light and the darkness, the rational and the irrational, mysteriously blend, creating a whole, which only the heart can fully comprehend and appreciate.

Hellenic Visions invites you to join Dr. Lena Hatzichronoglou in visiting Greece, and in opening your heart to the beauty, harmony, and balance, which Hellenism has always sought to express. Through the Greek language, literature, art, and architecture, philosophy, politics, myth and drama, you will be guided to experience the magical spell of this unique place, in which, the sacredness of your own spirit will be honored and celebrated. 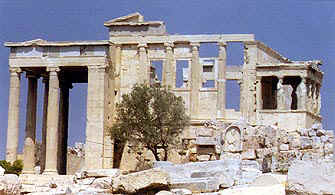 The Erechtheion on the Athenian Acropolis

Athens, the capital of modern Greece, is one of the most cosmopolitan cities of the Mediterranean world.
The hill of the Acropolis is the crowning glory of Athens. We will see the famous temple, dedicated to goddess Athena, called Parthenon, the Erechtheion, the Temple of Athena Nike, the Propylaia. On this hill we will experience Greece’s entire history: its mythical past, its tumultuous politics of the classical period, its Ottoman occupation, its present challenges. We will also visit the Ancient Agora, the hills of Areopagus, Pnyx and the Nymphs, as well as the Temple of the Olympian Zeus with Hadrian’s Arch next to it, the National Museum, the Lycabettus Hill, the National Garden, the Panathenaic Stadium, the Plateia Syntagmatos with the Parliament House, the Tomb of the Unknown Soldier and the Changing of the Guard. We will enjoy the humor and warmth of the Greek people by walking through the Monastiraki Flea Market, or by stopping for a meal at a lively taverna of the restored old Athenian district of Plaka. 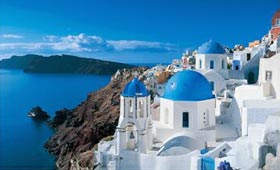 The Island of Santorini

There will be plenty of opportunity to learn, visit sites and museums, marvel at history, delight at magnificent, breath taking scenery, enjoy the sun at inviting beaches, experience the magic of Greek drama at  ancient theater sites, enjoy the city life among the Greeks, and have fun strolling around and contemplating at Greek cafes.

Dr. Lena Hatzichronoglou was born in Greece, and she is passionate about sharing her Greek Experience with people.  She holds a BA in Classics, Byzantine, and Modern Greek from the University of Athens, an MA in Classics from the Catholic University of America, and a Ph.D. in Classics from the Johns Hopkins University. She has also done studies and research at the University of Chicago, Yeshiva University, Dartmouth College, and the American School of Classical Studies at Athens. She is the recipient of many grants including grants from the National Endowment for the Humanities. She is a member of many professional associations, and her biography has been included in numerous Who’s Who. She is also the recipient of three teaching excellence awards, and she has given numerous talks both in professional meetings and as an invited guest speaker. She has taught the Greek Language, Literature and Culture of all periods at several institutions including the Johns Hopkins University, the University of Florida, Macomb Community College, and Wayne State University, where she was the Modern Greek Studies Director between 1990 and 1997. Recently she has established herself as  a Life Coach,  Public Speaker and Translator, and she is the founder and president of Hellenic Visions.​

THE COST DOES NOT INCLUDE:

HELLENIC VISIONS and or their agents, sub-agents and employees shall not be liable for any injury, damage, loss, accident delay or irregularity which may be occasioned either by reason of defect in any vehicle of transportation or for any reason whatsoever or through the acts of default of any company or person engaged in conveying the passenger while carrying out the arrangements of the tour. They cannot accept responsibility for losses or additional expenses, due to delay or changes in air or other services, sickness, weather, strike, war, quarantine, or other causes. All such losses or expenses are borne by the passenger. Baggage transportation is entirely at owners’ risk.

You are strongly advised to purchase personal insurance to cover costs of illness, accident, loss, etc.

I have read, I understand, and I agree to the above conditions

RETURN THIS FORM WITH FULL PAYMENT
OR SUBMIT PAYMENT VIA PayPal HERE:

FULL PAYMENT DUE   (not later than the end of March)

Enclosed is a check for $__________ as deposit for _____ reservations ($500.00 per person) in accordance with terms/conditions, contained herein, and those terms and conditions of purveyors of services expressly contained herein.

PRICE OF THE TOUR:

*If you wish, you can extend your stay in Greece for no additional travel cost  (not including your additional days’ accommodations), but you will have to indicate this upon confirming your reservation.

No refund or adjustment can be made for any unused portion of the tour package.

Click to see what THE RATE DOES NOT INCLUDE:

RETURN THIS FORM WITH FULL PAYMENT
OR SUBMIT PAYMENT VIA PayPal HERE: