Euripides’ “HELEN”
Or
What Are the Phantoms that We Are After?

Greek Literature has always treated the name and character of Helen with ambiguity.  On the one hand, she is represented as an eternal symbol of beauty, mystery, and charming enchantment; on the other, she is viewed as the “femme fatale” par excellence, the manifestation of Hesiod’s ‘beautiful evil”, the perpetual spark igniting conflict, war and destruction.

According to the legend, which is followed by Homer and most of the later writers, she had abandoned her Greek husband, and ran away to Troy with the handsome prince Paris. To bring her back, the Greeks organized a big expedition, which resulted in a long, destructive war, the “Trojan War.”  Ever since, this has become the mythical archetype of any war, the symbol of the perennial conflict of East and West, and it has been inextricably connected with Helen’s beauty and unfaithfulness. 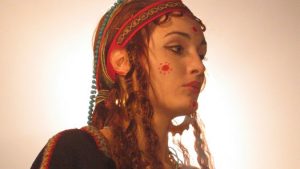 As in most cases, in his play Helen too, Euripides departs from the tradition, creating his own version of the story of Helen.  Using some elements he finds in Stesichorus, the sixth century BC lyrical poet, and in Herodotus, the fifth century historian, he freely improvises, and he creates a new story in which illusion and surprise play a dominant role.  So, in Euripides’ play, Helen was never unfaithful, she never went to Troy herself—her phantom did­–and, like another Penelope, she is patiently waiting for her husband in Egypt, where she had been supernaturally transported by Hera. So, here, the long struggle of the Greeks against Troy becomes an illusion, a deception of the senses a “nothingness.”  At the war’s end, the only reward for the Greeks is to recapture only the phantom of what they had perceived as being the real Helen.

It becomes obvious then that, in this play too, Euripides is playing with our perceptions and he is challenging us to question their validity. In a misty atmosphere of fantasy and imagination he makes it clear for us that what is beautiful and true, the real Helen, cannot be attained through conflict, and that the illusion of war will always leave us empty handed.

In this seminar we will look more closely at our own reality, and we will seek to discover the nature of the phantoms we often pursue.

Copyrighted material. Feel free to use it, but please keep it intact, including contact and copyright information as it appears at the bottom of the page.